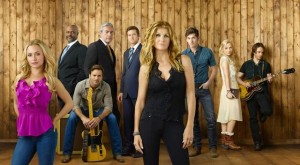 Okay Nashville, listen up. I already have one musical show I’m watching as it makes its march towards its series finale. That’s right. I’m drinking the champagne, dancing and ignoring the iceberg straight ahead as the Smash sinks.

I don’t know if I can take another show not living up to the promise of its pilot and disappointing me in every episode. In the words of Chandler Bing, I couldn’t be more Nashville’s target audience. I love country music. I love singing on television. I love big, sweeping prime time soaps. I still think there’s a chance I can be Connie Britton when I grow up. You couldn’t find a viewer who wants to love Nashville more. But lately the show seems to be taking that sentence as some sort of dare and testing the limits of exactly how much I can take before I quit the show.

The rocky first season Nashville proves how utterly challenging it is to produce a consistently compelling TV series. I don’t want to break up with Nashville. So I’m offering up my six point plan for saving the show.

What do you think can be done to save Nashville? Talk about it below.

3 thoughts on “Can ‘Nashville’ be saved?”