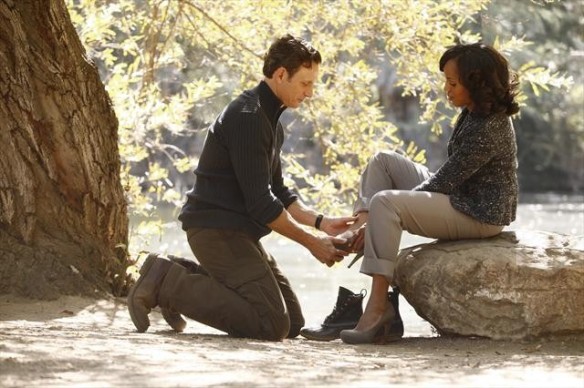 Love is in the air all over TV. A long simmering romance is finally blossoming on Castle. George and Dallas are positively adorable as they discover what it’s like to date after divorce on Suburgatory.  And the great tradition of falling for a former cast member of Friday Night Lights continues on Parenthood.

But while other couples are going out for fancy dinners and canoodling, several unhealthy relationships are getting plenty of screen time. A look at some of the most dysfunctional couples currently on TV:

Angela, The Senator and Oscar on The Office (Thursdays at 9 p.m. on NBC): This entire storyline is such a dark turn for The Office to take in its final season. Yes Angela isn’t the nicest character. She’s nasty to Kevin and was awful to Andy. She constantly puts down Pam and makes fun of Phyllis. But do I want to see her, as Kevin so aptly put it, discover that her entire life is a lie? Not really. I can’t find the humor in finding out that your husband is cheating on you with a man.  And after nine seasons, I would love to have Oscar find true love. But does that true love have to be at Angela’s expense? Not sure what the writers were thinking when they went down this path. There are not a lot of laughs to be mined here.

Olivia and President Fitzgerald Grant on Scandal:Just a few weeks ago I was wondering where this particular story line could go. There are only so many times a fabulously dressed Olivia can defiantly announce to Fitz that their relationship is over. There are only so many times he can give her his hurt puppy face in response. I liked the knowledge of their affair as a starting point for the series. The idea that they both want something they absolutely cannot have is a great undercurrent to all the action. But the whole thing was beginning to feel a bit redundant. Until, that is, the show hinted that Olivia, the First Lady, and Cyrus had collaborated to fix the election. I couldn’t figure out why the series kept emphasizing that the opposing candidate had lost by 4,359 votes in Ohio.  But now it definitely seems like there was some voter tampering going on and if Olivia wasn’t a part of it, she was aware of it.  And since it appears that the President was not, that should add a new interesting wrinkle to their relationship. While I’m on Scandal, as much as I love the show (it’s second on my must watch on my DVR list after Parenthood), I’m concerned that Olivia is getting duped by her clients too easily. She’s not the ultimate fixer if she discovers after the fact that the Governor did know his wife was having an affair. That kind of last minute bait-and-switch reveal reminds of what The Practice always used to do.

Carrie and Brody on Homeland: This duo is the definition of dysfunction.  Three weeks ago Carrie was triumphantly told Brody that he was under arrest for being a traitor to his country and this week she’s hungriliy making out with him in the woods.  What works about their twisted romance (if one can call it that) is that as a viewer, I never know if Carrie has true feelings for Brody, if she’s playing him or if it’s a little bit of both.  When she told him in the interrogation room that if she were being honest she would tell him she wants him to leave his wife for her, it’s hard to tell if it is some confession ploy or the real deal. And the thing is –  I don’t think Carrie knows her true feelings either. Her work and her life are so enmeshed that how she feels about Brody is part of her work.   There’s a fine line between love and hate but when it comes to Carrie and Brody, there’s a fine line between love and obsession.

Victoria and Conrad on Revenge: Since the dog died last season, there are no functional couples on Revenge. (Jack and the dog were our last hope).Everybody is using everybody. Conrad and Victoria viciously plot to bring each other down. They trade barbs and insults. But when they were both facing death,  they held hands.  It wasn’t sweet exactly but it was something. As the patriarch and matriarch TV’s most outlandish prime time soap, Victoria and Conrad are better together even if they both have a knife in the other’s back.

What couples do you think define dysfunction on TV? Talk about it below. I’m back on Thursday to check in on how some of this season’s new shows are doing (The New Normal, Nashville, Elementary). Remember to sign up to follow my blog (upper right hand corner) if you want to be part of my December TV Swag Giveaway  And if you’ve seen a familiar face or heard a great quote, email me and let me know.