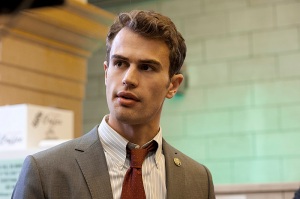 Often when I sit down to watch a new series, I don’t read any of the press material associate with the show. I want to watch the show not knowing exactly what it’s about or who it’s from. Given my profession, that’s not always easy to do, of course, but it happened with Golden Boy, premiering tonight at 10 p.m. on CBS.

By the time the DVD arrived, I had forgotten what the show was about. But as I began watching the pilot, something about the grittiness of New York City, the cuts between scenes, and the cadence of the characters’ dialogue seemed very, very familiar. “This show, I thought to myself, reminds me of NYPD Blue.” Turns out that’s because it’s executive produced by Nicholas Wooten, who began his career writing and producing NYPD Blue.

I should pause now to issue my disclaimer: -We all know I love TV. But sometimes my relationship with a show transcends that of viewer/TV show. There are some shows that hold a particularly special place in my life.  NYPD Blue is one of those shows. (The other four are Cheers, Beverly Hills 90210, Buffy the Vampire Slayer and Homicide: Life on the Streets). I loved NYPD Blue. I never missed an episode in its entire 12 year run. I still wonder what was the deal with Danny Sorenson and those paper clips. I still get chills when I think about the screen fading to white after Bobby died. I could talk to anyone for hours about how Andy Sipowicz is one of the greatest television characters of all time.

I tell you this because it means I’m predisposed to like Golden Boy. Anything that evokes the tone of NYPD Blue already is starting off in my plus column. Add in the fact that Greg Berlanti , the man behind my beloved Everwood as well as Brothers & Sisters, Political Animals and Arrow, is the show’s other producer and it almost feels like the pitch meetings started off with “We want to make a show that Amy Amatangelo will love.”

Theo James (aka the lost Franco brother) stars as NYPD Detective Walter William Clark, Jr. Seven years from now, Clark will become the youngest police commissioner in the history of the NYPD. The series flashes back to the present as we learn about Clark’s rapid and unlikely rise from rookie detective to commissioner. What we do know is that the seven years have not been kind to him – he looks and acts much older than his years. (Perhaps he needs to invest in a good moisturizer?)

CBS is the home of crime procedurals and what I like about Golden Boy is that the drama puts an interesting and innovative twist on the standard cop drama. Yes there’s the case of the week but it’s couched in the mystery of all that transpired between the present and the future. It’s a quirky set up that totally works.

Chi McBride co-stars as Clark’s partner Detective Don Owen. I can’t think of an actor who deserves for his series to be a hit more than McBride. He starred in Pushing Daisies, The Nine and Human Target –all great shows that were cancelled way too soon. Golden Boy should not be added to the list. The rest of the cast is also strong including Kevin Alejandro (who I still miss on Southland), Bonnie Sommerville (who starred in the final season of NYPD Blue) and Holt McCallany (Lights Out).

There’s been so much talk lately about the new shows that have tanked in the ratings including Deception, Do No Harm, and Zero Hour. But those were all bad shows. Golden Boy is a good show that could become a great one. I’m rooting for it to be around for a long time. After you watch the show tonight, let me know what you think.