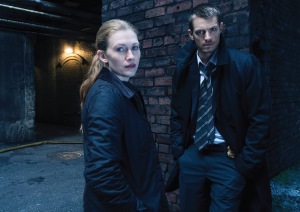 Believe me. I can get very angry at TV shows. Some might even call it irrational anger. I could vent to you for hours about how silly it was to kill off Kyle on Smash or, you know, basically everything that happened this season on Glee. (I’m telling you now I will never get over the ridiculousness that was the Santana/Quinn hookup. NEVER.)

But, when the first season of The Killing ended, I wasn’t in an uproar. I didn’t feel the show had made an explicit or even an implicit contract with the viewers to reveal Rosie Larsen’s killer. However, when the second season lingered on and we still didn’t know who the killer was,  I got bored. And here’s the most telling part – I watched the entire second season and, just now, I actually had to look up who the killer ended up being. The show left so little impact at the end of two seasons that even the solution to the big mystery didn’t stick.

During the second season, I also started to get so annoyed with the show – the outdated technology (seriously even my parents don’t have flip phones anymore and it has been well documented that they live in the house that technology forgot), the never-ending rain, the inexplicable leaps in logic (Linden and Holder clearly attended the Ryan Hardy Institute of Not Requiring Back-Up Ever) and the tedious pacing (more happens in the first 15 minutes of a Scandal episode than happened in the entire second season of The Killing). But the real problem was Sarah Linden (Mireille Enos). Enos gives a palpably believable performance but her downtrodden character simply sucked the life out of the show. It’s tricky to have a character who is that gloomy as the show’s protagonist. And it was painful what a bad mother she was.  There is something inherently interesting about a mother who clearly loves her son but can’t get it together but on The Killing it was just plain depressing to watch. When the show was cancelled, it was a relief. I wasn’t quite sure why I watched the entire second season (it was summer?) but cancellation meant I didn’t have to make any active decision about whether or not I was going to continue on with the show.

But, against all odds, the show returned from that great DVR in the sky and I decided to watch the third season premiere and then make a decision. I was thrilled that , at the beginning of Sunday’s two hour season premiere, Linden was smiling. She was actually giggling. She and Holder had a hilarious exchange (as always Holder remains the bright spot in the series). “Maybe,” I thought. “Just maybe this season will be different.”

Alas, I was wrong. Linden’s happiness lasted about 15 minutes and she was back to being beaten down again. The show is wallowing in everything that drove viewers crazy. There’s an endless amount of rain. Holder STILL has a flip phone (I’m going to mail him my old cell phone because it’s more current than the one he’s using) and the pacing remains sluggish.

But, as expected, Peter Sarsgaard is wonderful as Ray Seward, a man on death row for the murder of his wife.  And I’ve already grown a little attached to all the homeless teens (they’re like a very dark, dark version of an ABC Family show.)

So now I have to decide whether this season’s mystery is going to be enough to hold my attention and will it be enough to outweigh all the things about the show that drive me batty. I mean maybe I am looking for a show that drives me crazy now that Smash is off the air?

How about you? Did you watch the season premiere of The Killing? Are you going to keep watching season three? Talk about it below.

5 thoughts on “Should I Kill Off ‘The Killing?’”