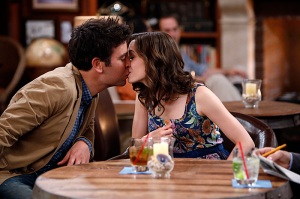 When I talked to Carter Bays at TCA Press Tour (you can read that interview here), I told him that I only criticize How I Met Your Mother because I love the show so much. And it’s true. If I’m indifferent towards a show, you won’t hear me talk about it.

My affection for HIMYM runs deep. I’ve watched the show since the pilot and was an early champion of the series. True story – my husband and I talked about our love for HIMYM on our first date.  And let’s be honest, whatever happens this season and no matter how frustrated I get, I’ll be watching until the very last frame. (By the way, I remain very concerned that The Mother is dead in the future. And my interview with Bays did not assuage those fears.)

Bays and HIMYM co-creator Craig Thomas are two of my favorite people in the industry. They love talking about their show as much as we love watching it. I so admire what they’ve done with HIMYM – has any other comedy run for nine seasons on a central mystery? A mystery that was announced in the title? The intricate way they’ve told the story of five friends navigating their lives and romances in New York City truly is like nothing else on television. Over the years the show has provided me with some of my favorite laughs (I still crack up about Lily asking Marshall, “Do you want to finish your bacon first?” in “Not a Father’s Day.”), favorite scenes (I love Ted’s two minute date with Stella in “Ten Sessions”), favorite catch phrases (The show will always be legendary to me.) and favorite recurring jokes (The gang can stage an intervention for me any time). I love Bays and Thomas’ love of pop culture. Marshall’s diatribe last week about Princess Bride was the best.

But the show is testing my loyalty. After a strong premiere, these last two episodes have been ROUGH. Maybe the show is trying to distract me from worrying about Winston on New Girl or how I still can’t care about any of the interns on Grey’s Anatomy. Because this week I am consumed with concern for HIMYM.

Let’s talk about my issues:

How are you feeling about HIMYM so far? Talk about it below.