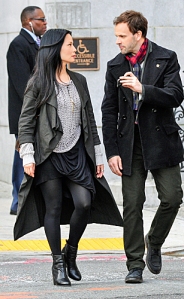 There are some television seasons that will forever be etched in my memory.  In 2004, Desperate Housewives, Lost, Veronica Mars and House all premiered. That, as the saying goes, was a very good year.

And there are some pilot episodes that were magic immediately. I can remember sitting on my couch in 2003, putting in pilot after pilot and stumbling upon Arrested Development. I’m not exaggerating when I say I got chills the pilot was so good. Chills.

Alas, this television season isn’t like 2004 and I don’t think any TV pilot quite captures the sheer brilliance of the first Arrested Development.  But there are still some shows I am excited about.

Here are my picks for the best new show on each network:

Elementary (premieres September 27 at 10 p.m. on CBS): Yesterday I talked about how disappointing it was to have Jordana Spiro and Zach Gilford, two of my favorite TV stars, in a bad show. Thankfully Elementary is the opposite of that. Another two of my favorites -Jonny Lee Miller, who I will always adore because of Eli Stone, and Lucy Liu, who was simply fantastic on Southland last season – headline this CBS drama. And, yes, it is another crime procedural from CBS and, yes, it is another Sherlock Holmes remake. But none of that really matters because it’s such a strong pilot. I want to see more of recovering drug addict Sherlock Holmes and his equally-troubled-but-in-a-different-way sober coach Joan Watson.  Added bonus – Miller gets to use his real accent.

Nashville (premiering October 10 at 10 p.m. on ABC):  Nashville is, by far, the best new show of the season. Connie Britton (Friday Night Lights) stars as country music superstar Rayna Jaymes. As the series opens up, Rayna is facing declining ticket sales and her handlers want her to team up with teen singing sensation Juliette Barnes (Hayden Panettiere, Heroes).  Juliette doesn’t have the best voice but that doesn’t matter in this new auto-tuned world.   You know how Friday Night Lights was about so much more than football? Nashville is about so much more than country music (although the music in show is excellent). That’s why I believe the show could be phenomenal. The pilot lays out several intriguing story lines in addition to the Rayna/Juliette dynamic including Rayna’s romantic past and her current marriage, Juliette’s troubled background, and Nashville intricate political landscape. I cannot wait to see where the show goes next.

Ben and Kate (premiering September 25 at 8:30 p.m. on FOX): Nat Faxon is one of those actors I totally root for. Years ago he was on the short-lived comedy Happy Hour. The show was awful but Faxon still managed to make me laugh. He always can make even the lamest material pretty hilarious. Ben and Kate makes the most of Faxon’s many, many talents.  Faxon stars as Ben, the older, immature brother of Dakota Johnson’s responsible Kate.  Kate has a five year old daughter Maddie (Maggie Elizabeth Jones) and a best friend BJ (Lucy Punch, whose performance in the pilot is a little too much like Catherine Tate’s Nellie on The Office). Everyone here, including Echo Kellum as Ben’s best friend Tommy, is pretty great and the script is smart and quick. But it’s really Faxon who makes the show. Whether he’s telling five-year-old Maddie that she’s naïve or rehearsing how he’s going to win back his ex-girlfriend, Faxon is uproarious. Last year, Max Greenfield exploded because Schmidt was the right character at the right time with the right actor. I believe and hope that Ben will do the same for Faxon’s career.

Arrow (series premiere October 10 at 8 p.m. on the CW): Arrow is definitely the best new show the CW has this fall. But it didn’t have much competition for that title given that Beauty and the Beast and Emily Owens M.D. are the CW’s other new shows. However, here’s what makes me think Arrow could be great. The show has found a true star in Stephen Amell who headlines the series as Oliver Queen. You’ve probably already heard about his abs, which are put on terrific display in the pilot and ads for the series but Amell also has the gravitas to pull off the role of a ne’er-do-well playboy who returns home five years after everyone thought he was dead. (Because it was driving me crazy when I was watching the pilot I will tell you that Amell played the paramedic who romanced Violet last season on Private Practice).  The other thing the show has going for it is executive producer Greg Berlanti. Berlanti is the man behind Everwood, Brothers & Sisters and this summer’s addictive Political Animals. His presence makes me think Oliver’s backstory and family dynamics will become extremely entertaining.

Go On (Tuesdays at 9 p.m. on NBC): Matthew Perry excels at playing the guy with a sardonic exterior that belies the sweet and sensitive guy underneath. This was the persona he perfected for ten seasons of Friends and this is the persona that’s present in Go On.  Sportscaster Ryan King is an older version of Chandler Bing (look their names even rhyme!) It’s a role that allows Perry to be funny and heartfelt in the same episode. The premise provides a rich environment for comedy and pathos – a man grieves the loss of his wife through a wacky therapy group. The show has a strong supporting cast including John Cho as Ryan’s boss and Tyler James Williams as Owen, a teen in Ryan’s group.  Go On is still finding its rhythm but both the pilot and the second episode had several moments that made me laugh out loud. Could I be any more excited?

Those are my picks for the best new show on each network. Talk about which new shows you are most looking forward to below.

This week I will also be talking about the season premieres of Castle, The Office and Parks and Recreation and, of course, the Emmys.  Follow my blog so you’ll know every time I have a new post.