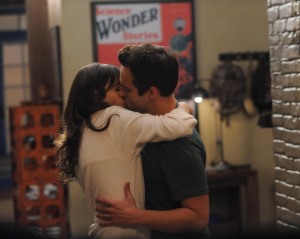 Can we talk about the kiss Jess and Nick shared on this week’s New Girl? That was one excellent TV kiss. I’m blushing just thinking about it. Nick is so my new secret TV boyfriend.

I had a chance to talk to Jake Johnson when I was in LA recently. You can read my interview with him here. Johnson had really interesting things to say about whether or not Nick and Jess should get together.  Nick has really blossomed as a character this year. I like to think of him as the sleeper breakout character of the season. He’s kind of snuck up on us.

I am fascinated by how the show is handling the whole Jess/Nick “will they or won’t they” conundrum. Much like how The Office handled Jim and Pam, Jess and Nick aren’t monopolizing the story telling but they are kind of percolating underneath the roommate shenanigans at all times. I don’t want them to get together yet. And I definitely don’t want a possible romance between the two of them to dominate the show. But, like Ross and Rachel on Friends, I’m pretty sure they belong together. How about you?

And speaking of The Office, I’ve been hearing from quite a few of you who don’t like the big fight that Pam and Jim had last week. As you know, I usually like TV shows to end with  all the characters still continuing on in perpetuity. Sam is still bartending on Cheers. The Friends gang still meets up at the Central Perk except now they talk about which private school is best and how to handle the rebellious teenage years.

But with The Office, I don’t want to think of Jim still working at the Scranton branch of Dunder Mifflin forever. Since the show’s inception, Jim has been an underachiever who has never realized his full potential. I’ve liked this arc of Jim pursuing a new and inherently risky business venture.

Pam has always been the one who was happier with the status quo – the most telling insight into Pam’s character was when she was thrilled that Jim had secretly bought his parent’s house. She’s interested in pursuing her artistic ambitions locally. She painted a mural in the warehouse and applied to paint a mural for the city of Scranton.

That tension in Pam and Jim’s marriage to me is utterly believable as was their fight. Who hasn’t been in argument where you take out your anger at the wrong person when the person you are most mad at is yourself? Jim was frustrated that he had lost a key investor and upset that he missed Cece’s first dance recital. So he got irrationally angry at Pam for not taping it. I’m not saying he was right, of course, but the fight rang true. (As a side note, the only thing I didn’t find believable was that CeCe would be in a dance recital. Pam had CeCe around the same time I had my daughter so I think CeCe is about a year away from any kind of group performance, but I quibble).

I also liked that this was the way we finally got to see someone from the documentary crew. Of course if the show heads down the path of Pam and Brian (Chris Diamantopoulos) flirting or Pam considering an affair, I may never speak to the show again and I take back everything I’ve said. Because the Pam I know would never, ever do that.  But I like the idea that Jim and Pam have known Brian as long as we have known Jim and Pam. Just as we need to meet the mother before How I Met Your Mother ends, we need to meet the documentary crew before The Office signs off.

Jim and Pam have always been the heart of the series and last week’s fight hit on the crux of the tension that has always existed in their relationship. I liked it. How about you?

And finally, let’s talk about Do No Harm, premiering tonight at 10 p.m. on NBC. The drama couldn’t ask for a better lead in. It will debut after the series finale of 30 Rock and a one hour episode of The Office. NBC hasn’t had a good show in the Thursday night 10 p.m. time slot since ER went off the air. And, alas, Do No Harm continues that trend.

Steven Pasquale (Rescue Me) stars as Dr. Jason Cole, a talented neurosurgeon who suffers from multiple personality disorder. Every night at 8:25 p.m. exactly his evil alter-ego Ian Price takes over and wreaks havoc on his life. I can play it pretty loose with TV in terms of facts but seriously every night at 8:25 p.m.? Yes that’s exactly how mental illness works. It’s nothing if not precise.

I might have been able to overlook that if the whole show hadn’t played like a Saturday Night Live skit. There were so many points where I was laughing when I know that’s not the reaction the series was hoping for. I really like Pasquale and I loved him as Sean on Rescue Me (and fun fact he’s married to Go On’s Laura Benanti in real life) but these characters are not for him. He plays Ian as totally maniacal and borderline cartoony. No need to watch Do No Harm. Trust me. You can listen to me talk about the show with my friend and fellow TV critic Mekeisha Madden Toby here.

Be sure to check out my review of tonight’’s 30 Rock series finale in Paste Magazine.

That’s all for today. What do you think about New Girl and The Office? Are you going to watch Do No Harm? Talk about it below.