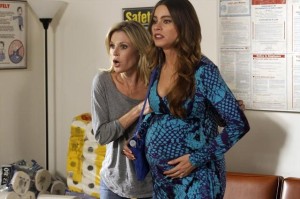 As we have discussed, I don’t require a lot of realism in my TV shows. I’m okay with most of the outrageous TV conventions. Couples can have babies that they often seem to forget they have.  Female detectives can walk around all day in high-heeled shoes.  Characters can go to work at offices that don’t require they do any actual work. Jess can pack a sexy negligee to go to a safe house. Heck Abu Nazir can even Skype with Brody on a smart phone and, in general,  I’m pretty much okay with it.  Let’s take a look at some of the things that happened on TV last week and see where they landed of the believability scale.

Let’s start with pregnant Gloria on Modern Family.  I loathe pregnant Gloria. Loathe her. It’s as if the writers googled “pregnant women stereotypes” and then decided to gift Gloria with all those traits this season. She doesn’t want to wear maternity clothes. She’s forgetful, irrational, emotional, and even unbalanced. I’ve been pregnant and I’ve known a lot of pregnant women and no one I know acts like this. For some reason I am unable to willingly suspend my disbelief on this one. Perhaps it’s because pregnant Gloria is not funny. She’s just gratingly annoying.  Can you imagine how ridiculous she’s going to be a mother of a newborn? Believability Rating: 1 out of a possible 10

Over on New Girl, the comedy tried to send women over 30 into a panic about their ovarian egg reserve. Let’s ignore the fact that the show blatantly disregarded actual medical facts on what constitutes ovarian reserve testing, when it can happen, and how the results are interpreted. I’ll  go ahead and suspend my disbelief on that one because hopefully no one is seeking out medical advice from a television comedy.  What bummed me out about the episode is that there is a larger, more thoughtful conversation to be had here about being a single woman over 30 who knows she wants to have a family but isn’t ready to yet. Instead we got lines like Jess shouting “give my nipples a purpose” and her referring to her uterus as a 1930’s dustbowl.  I’m curious to see if the show brings this topic up again or if it was merely a one-shot plot development. Although I know this is something that mostly affects women, it would be great to see some male characters (other than Ted Mosby, of course), discuss their desire to have a family. Believabilty rating: 0 out of 10 on medical facts, 3 out of 10 on emotional reactions

But thank goodness Liz Lemon had the most perfect wedding on 30 Rock. As I wrote about in my review of last week’s episode for Paste Magazine, Liz was able to confess that getting married was a big deal without losing her sense of self or suddenly becoming a different character entirely. I would have been so angry if suddenly she wanted to wear a princess ball gown and surround herself with women in pastel-colored matching dresses. That’s not the Liz Lemon we know and love. I really hope she and Crises get to have a baby before 30 Rock says its final goodbye in January. Believablity rating: 10 out of 10.

I  also wrote about my beloved Parenthood in Paste Magazine’s Best TV Shows of 2012.  But what I want to talk about today is how much the show is stressing me out. What is Sarah doing? After my initial panic, the series has set up the Hank/Mark/Sarah triangle believably.  Hank and Mark are such completely different people and you can see how they each offer attractive qualities the other doesn’t have. I even believe that Hank kissing Sarah would send her into a full-fledged panic where she would immediately move in with Mark to try to squelch any feelings she might have for Hank. But would she cancel her plans to attend a wedding with Mark to help Hank out? I’m not so sure. I don’t quite know what the show is trying to do here. And I like not knowing. But if Sarah and Mark do break up, we have to figure out a way to keep Mr. Cyr on the show. Believablity rating: 6 out of 10

Okay, now let’s talk about Homeland. At some point this season I decided to give into all the ridiculous Homeland plot twists and just go with the show. It’s absolutely one of those situations where if you think about a show too much you’re not going to be able to enjoy it. And I want to enjoy Homeland.  So I went with the fact that the world’s most renowned terrorist would be able to get into the country, rent a car, buy a big gulp (really he doesn’t have a minion he can send in to the convenience store?) and kidnap Carrie. I’m not saying I preferred this plot twist, I’m saying I  went with it. But the biggest question Homeland faces now is: Can the show continue with Brody or does he need to be killed off? Brody crossed a line he had not crossed before when he killed the Vice President.  His switching from abject horror at what Abu Nazir was asking him to do to smirking as he told the Vice President he was killing him was way too abrupt. And what’s with Carrie going back in to find Abu Nazir? She’s like the teens in some B horror movie that go into the woods alone. My biggest concern with the most recent episode is that Brody has long been a bad guy for whom I’ve had some degree of sympathy for but that’s gone now.  And I’m not sure I’m interested in watching a completely evil Brody. I was hoping for way to keep Damian Lewis on the show next season because I love him so but I don’t see how that’s possible now. I’ve learned, of course, to never doubt Homeland so I can’t wait to see what happens in the final two episodes of the season. Carrie believability rating: 5 out of 10, she  is crazy enough to go after Nazir. Brody believability rating: 4 out of 10, why didn’t he give Nazir a number that was a little bit off?  Abu Nazir believability rating: -1 out of 10, but I didn’t care.

That’s all for today. I would love to hear your thoughts on Modern Family, New Girl, 30 Rock, Parenthood and Homeland below. And if you have seen a familiar face or heard a great quote, definitely let me know about it.