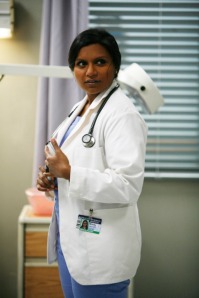 There are times when I am out of sync with the rest of the critics andThe Mindy Project (premiering tonight at 9:30 p.m. on FOX) is one of those times. I’m not feeling the love that so many are bestowing upon the show.

It’s not that I hated the new comedy from Mindy Kaling. I am simply not wildly enthusiastic about it. Kaling stars as Mindy Lahari, an OB/GYN with a successful medical career and a disastrous personal life.  That’s a great and relatable premise for a show. My problem is that the whole pilot has this “Look at me! Aren’t I clever and cute?” vibe.  And I do think Kaling is clever and cute but the pilot feels too self-aware and self-conscious.

(My other gripe with The Mindy Project is that it took Anna Camp away from The Good Wife. And I loved Caitlin. She was a fantastic foil for Alicia and her departure was way too abrupt. I know this doesn’t really count as a legitimate gripe with the series but I had to share.)

The show definitely has a potential breakout character in Chris Messina, who plays Mindy’s fellow doctor Danny Castellano. It would be great to see Messina, who also plays Reese Lansing on The Newsroom, finally have his moment. And if The Mindy Project doesn’t work out, he can just move in with the boys over on New Girl.

I’m not against The Mindy Project, I’m just not for it yet.  After you watch the show tonight, let me know what you think.

Vegas (premiering tonight at 10 p.m. on CBS) is another show I would love to love. Jason O’Mara is a man who deserves a hit TV series.  I’ve been a fan ever since his character terrorized Brenda on The Closer. Until the bizarre finale, Life on Mars was a fantastic show and there was great potential in Terra Nova. O’Mara swings for the fences when he picks a TV project and I really admire that.  I’ve loved Dennis Quaid ever since I saw The Big Easy (so interesting that both he and Ellen Barkin are in new TV shows this fall). And, of course, it’s always fun to have Michael Chiklis back on TV. Really, you couldn’t ask for better headliners.

Quaid stars as Ralph Lamb, a reluctant sheriff in the 1960’s in Las Vegas. O’Mara is his brother and Chiklis is the gangster Lamb must battle. Chiklis clearly enjoys playing bad and this role seems much more comfortable for him than the heroic family man he played in No Ordinary Family. But there’s also something far too familiar about Chiklis in Vegas. It’s like Vic Mackey got sent back in time (perhaps during a Life on Mars/The Shield crossover event?). His performance almost seems redundant.

The pilot for Vegas moves very, very slowly. Make sure you drink lots of caffeine before you sit down to watch this show.  Mad Men looks downright speedy compared to Vegas.  It’s a totally different pace for primetime television and one that I’m not sure will work.  But there is still some good stuff here. I will be following the show closely. After you watch tonight’s premiere, let me know what you think.

Finally I will be holding the first meeting of the Private Practice support group tonight when the show returns for its sixth season tonight at 10 p.m. on ABC.  Really there is absolutely no reason why I should still be watching this show or why I should care if Addison picks Sam or Jake.  So, if you still watch the show too, join me tonight so we can commiserate together.

Remember to follow my blog by entering your email in the upper right hand corner. That way you’ll know every time I have a new post. And don’t forget to email me your favorite quotes and familiar faces this week. I’ll be posting them on Thursday.