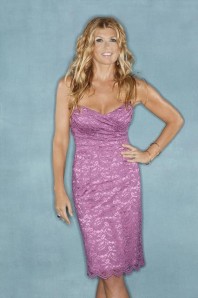 We loved her in Friday Night Lights. We were a little freaked out by her in American Horror Story.  And now Connie Britton has the best role of her career as country music superstar Rayna Jaymes in Nashville (Wednesdays at 10 p.m. on ABC). I hope you all watched the premiere last night and loved the show as much as I did.

Luckily, along with some of my fellow reporters, I had a chance to talk to Britton recently.

On the rivalry between Rayna and Juliette Barnes (Hayden Panettiere) and playing older to Panettiere’s young.

I think the whole idea of this rivalry has been a little overdeveloped. I never saw the show in those terms and I’ve worked really hard to not have the show become about being quote unquote old because I certainly don’t feel old and I’m not interested in playing old. So I don’t want it to be about old versus young or about one woman versus another woman. I think what our two characters represent are two people in very different phases of their life and very different phases of the music business.

On how she describes Rayna

Rayna is a really really strong character. She’s a self-made character and she’s a survivor so that’s an interesting thing to watch in her character, to watch her strength. She just pulls from whatever it is that she knows to survive and keep going. She supports her family and she has created this career not out of folly but because she really needs it as a woman and as a person kind of moving away from her family and creating her own path.

I actually know a lot.  [Executive producer] Callie Khouri is really into backstory which is really fun so we sat down and we really dished it out and it’s fun because there’s such a rich history. Rayna has lived her life with her band members. She’s had a relationship with the head of her band and now she’s in this marriage. There’s a lot of backstory but I don’t want to give it all away. I do think there’s going to be redemption for everybody involved and I’m always interested in that.

On her success as an actress

I’m really just grateful all the time about it. Every character I play I try to play such different characters but there’s always one strong intent and that is to play women in a way that portrays them as powerful and true and complex sort of comfortable in their own skin even in the midst of crisis and chaos and whatever form that takes, whatever story that takes.  I think people appreciate that. Listen in TV we have a lot of opportunity. We’re seeing a lot of really strong woman characters on television but I think to play a strong woman who is also accessible and vulnerable and has a lot of same qualities as most women do, I think people appreciate that and my hope is to keep doing that.

On the music business

Not unlike Hollywood, I think the music industry can be very cutthroat but the flip side of that is I also think that there’s a lot of support in the music industry. Talking to a lot of people I know in the music industry there’s actually a lot of appreciation for women who are in their 40s. There is ageism for sure but there’s also a deep regard for people who have established themselves and have really lived a life in music so I think you see both. I think the city of Nashville has really embraced this show because we have every intention of portraying Nashville in a very true and honest way.

It’s actually surprising every single time it happens. It was so hard to get acknowledgement from Emmy voters on Friday Night Lights so, by the end, any Emmy nomination we got felt like an Emmy nomination for the show. But then to go into American Horror Story and have that show acknowledged in such a huge way was thrilling in such a different way. First of all, I was very surprised frankly because that felt like a risky role for me to play particularly after playing Tami Taylor on Friday Night Lights. To feel that show and that role was embraced by audiences as much as my role on Friday Night Lights was, it felt very sort of vindicating and thrilling.