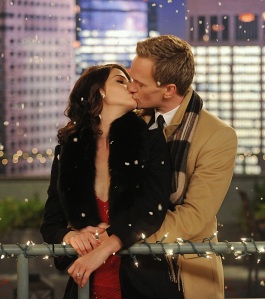 Last week I talked about my ten favorite shows of the year. And, of course, those shows had some wonderful episodes in 2012. “The Other Woman” episode of Mad Men  was my favorite episode of the year.

But this week I thought I would turn my attention to my ten favorite episodes on shows that didn’t make it to my top ten list (got that?). It’s the holiday season — I’m spreading the love around.

My 10 favorite episodes of the year:

1. “Stride of Pride,” 30 Rock (October 18, 2012): This is the episode where I fell even more in love with Liz Lemon.  In 22 glorious minutes, Fey took on the ridiculous argument that woman can’t be funny. Plus we got a fun guest appearance by Olympian Ryan Lochte and a scathing commentary about how Hollywood treats actresses in their 40s. What more could you want? If you missed the episode, NBC is repeating it next Thursday, December 27.You can read my review of the episode for Paste Magazine here.
2. “The Final Page, Part 1 and 2,” How I Met Your Mother (December 17, 2012): This is the episode that made me go, “Oh right. This is why I love How I Met Your Mother.” In the final moments of the episode, viewers learn that Barney has pulled a long con on Robin to get her to realize that she’s in love with him.  The episode harkened back to the show’s glory days with inside jokes and delightful rapport among the friends (the jinx rule was right up there with the slap bet).  Plus it managed to shock viewers even when we knew was going to happen. Here I was annoyed that the show was drawing out the Barney and Robin engagement AGAIN and then the show pulled off one of the best surprises of the season.  It really was legen-wait-for-it- dairy. Bonus points for a terrific performance by Ellen D.Williams.  YESI’MTALKINGABOUTYOUPATRICE!
3. “Handle Your Scandal,” Nurse Jackie (June 17, 2012): I tend to binge watch Nurse Jackie. I’ll watch an entire season in one week. Perhaps that’s why the season finale hit me so hard. The anguish on Dr. Mike Cruz’s face as his son is brought into the ER stayed with me for a while. As brilliantly played by Bobby Cannavale, Dr. Cruz was a great adversary for Jackie because, even though he was often awful,  you could understand his point of view. Jake Cannvale, the son of Bobby Cannavle, was fantastic as a lost teenager trying to find himself in all the wrong places.  Every character dynamic reached its peak in the show’s season finale.
4. “Pilot” Smash (February 6, 2012): No, the musical drama did not live up to the promise of its pilot (boo Ellis! Boo!) but the pilot was a fantastic hour that did everything right from character introduction to central conflict. Let me be your star, indeed.
5.“Jimmy’s Fake Girlfriend,” Raising Hope (February 14, 2012): First of all I should have given an honorable mention to Raising Hope last week.  The show is terrific and weird and terrifically weird.  Its humor is out there and hilarious. And this episode, which found Jimmy conjuring up a fake girlfriend to make Sabrina jealous, was genius. The comedy upended audience expectations by putting the will-they-or-won’t-they couple solidly together (a move which totally worked) and putting the couple together in the sweet way while staying true to the unique humor of the show.
6.“A Reunion . . . “ Don’t Trust the B____ in Apt. 23” (October 23, 2012): Everything came together in this episode that found James Van Der Beek desperately trying to stage a Dawson’s Creek reunion.  I love the glorious relish with which Van Der Beek good naturedly mocks himself and the show that brought him fame. Add in cameos by Busy Phillips, Frankie Muniz and Mark-Paul Gosselaar and I don’t want to wait to tell you how much I loved this episode.
7.“The Dream Team” The Good Wife (May 6, 2012): Let’s all think back to the time BN – before Nick. Before the show went all 50 Shades of Food Products on us.  In this third season finale, two of my favorite guest stars (Martha Plimpton and Michael J. Fox) return to try to take control of the firm. The episode also featured the fantastic ending of Kalinda starring at her door with her gun loaded as she hears a knock on the door. Too bad that didn’t work out.
8.“Always”/“The Final Frontier”  Castle (May 7, 2012 and November 5, 2012): I know I’m breaking my own rules by picking two episodes from the same show but I simply couldn’t decide. “Always” brought television’s best star-crossed couple together in a way the delighted fans and “The Final Frontier” had such fun with Nathan Fillion’s status in the science fiction genre.
9.“My Life/Your World Parts 1 and 2” Cougar Town (May 29, 2012): I love the wine-loving cul-de-sac crew and never did I love them more then when Grayson and Jules got married and Travis confessed his love to Laurie. The title sequence read “Welcome to Cougar Town: Hopefully this is only the season finale.” Lucky for us it WAS only the season finale. The show returns with new episodes January 8 on TBS.
10.“The Countdown Reflection,” The Big Bang Theory (May 10, 2012): Since adding Melissa Rauch and Mayim Bialik to its cast, this comedy has thrived. The fifth season finale, which featured Howard and Bernadette’s wedding and ended with all the cast holding hands as Howard launched into space, was the perfect combination of humor and sweetness.

Those were my favorite episodes of the year. What were yours? Talk about it below.